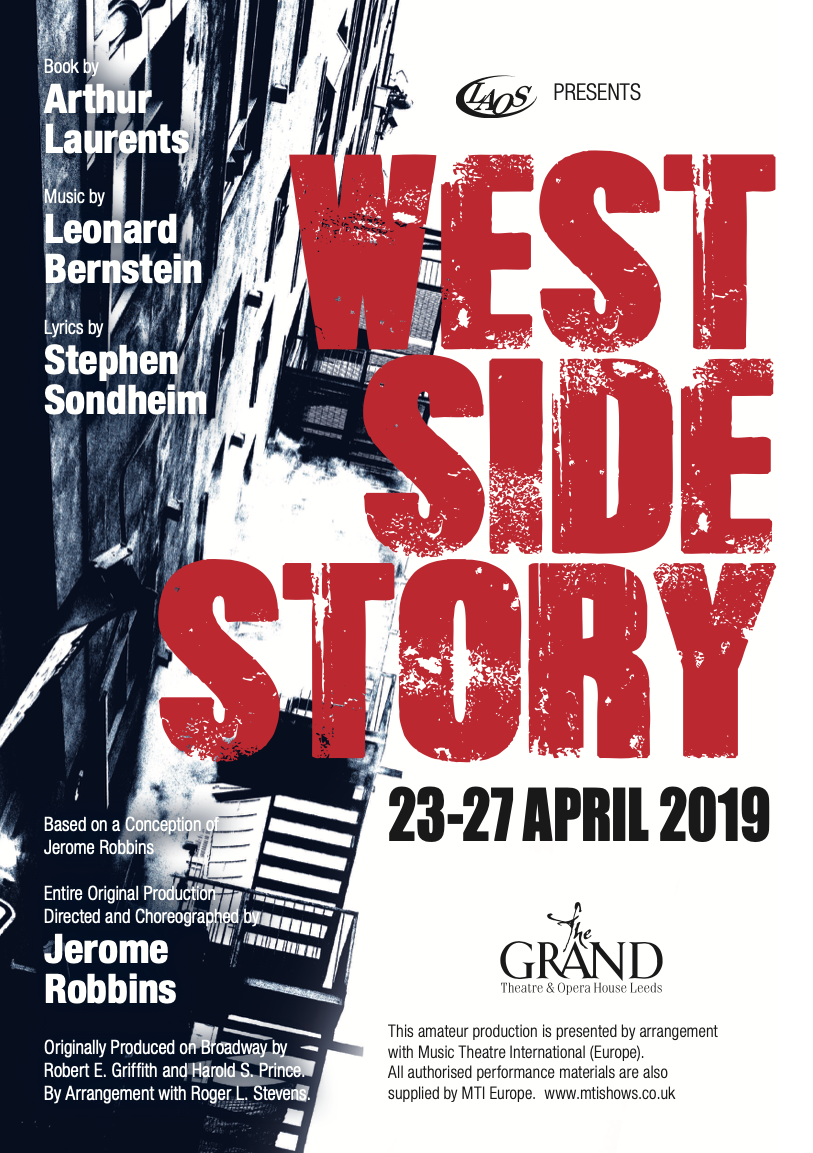 If ever a musical had the ‘wow’ factor, then this is it – from its opening on Broadway in 1957 to its opening in the West End in 1958, it’s always been a sure-fire winner – it has resonated down the years and has constantly reflected the attitude of young people, coming from deprived and multi-racial backgrounds, wishing to make a difference to their worlds. The story, taken loosely from ‘Romeo and Juliet’ has grit, determination and a message to the warring factions of ‘native’ Americans and ‘immigrant’ Puerto Ricans, facing up to each other in Manhattan, New York.

LAOS took a huge decision to bring it to the Grand Theatre stage – but how lucky we were that they did! This was indeed a first-class production in every detail.

Louise Denison’s direction and choreography reflected beautifully the 50’s period – and I am so glad she was not tempted to up-date the piece to make it more contemporary. This is an iconic musical and she directed her very talented cast extremely well – no attitude or turn of phrase was missed. The young, vibrant cast played their parts with energy, clear diction and amazing vocals. There were also sensitive performances from the ‘adult’ cast, who strived to help (or hinder) the tearaways.

Musically, this show is a real tour-de-force, but, as always, this was in the expert and capable hands of Musical Director, Jim Lunt – the orchestra were excellent professional musicians and did not overwhelm the singers.

It’s hard for me to mention individual performances without mentioning the whole cast – but I want to say a special congratulations to Tony (Ben Reynard) and Maria (Caitlin Magee) for their stellar performances, supported by Riff (Ronan Pilkington), Anita (Fiona Yeadon), Bernardo (Joseph Nunes) and all the Jets and Sharks and their ‘girls’ – brilliant!

I must make special mention of the Creative team, under the experienced guidance of Production and Stage Manager, Andy Thomson. A simple but effective set, reflecting the environs of New York, was very well lit and I have to say, the most brilliant scene changes, done with speed and diligence. Hair, make-up and costume all added excellently to the overall look of the production.

I reflected, on my way home, that the Grand Theatre present all the major touring professional musicals throughout the year. LAOS should be truly proud to stand alongside these ‘giants’ and produce a professional musical themselves, which is no mean feat – with just one technical and one dress rehearsal, this is a mammoth task indeed and I congratulate this remarkable society for a tremendous evening’s entertainment.