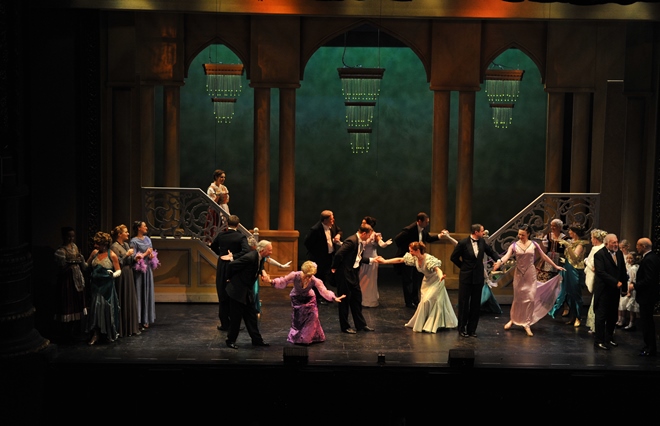 Leeds AOS have a winner here with their production of Sound of Music. Before the show even started between 70 and 80% of the seats had already been sold. The stage show and film have always had phenomenal appeal to the general public, and I am sure that for generations to come this will continue.

An interesting history of the show in the programme tells us that the musical first came to London in May 1961, and the film version starring Julie Andrews and Christopher Plummer  opened in New York in March 1965. For me the musical show seems to have lost some of its appeal. There are so many scene changes making continuity difficult, and who can forget in the film the effect of the Von Trapps walking over the mountains into Switzerland which tends to disappoint in the musical. Sound of Music now comes across as more a play and music, but still enjoyable.

Louise Denison as Director/Choreographer and Jim Lunt as Musical Director have done incredible work for the Society. This fine orchestra together with their Musical Director add to the enjoyment of some wonderful singing, particularly with the nuns. Over 100 children auditioned for the Von Trapp family. The first night ‘Rodgers’ team which I saw were fantastic, and Louise Denison’s work with them obvious. All of them were a joy to watch, each of them very talented in their own right. Their routines with Maria were sparkling and lifted the show. Tuesday’s team was Martha Frances-Henry, Daniel Nattrass, Eleanor Hemingway, Aaron Cawood, Molly-Anne Alston, Rebecca Mayson and Charlotte Carr. As Liesl, Martha was prominent and the pleasing duet ‘Sixteen going on Seventeen’ with Rolf, played by Ben Lancaster, was beautifully danced and choreographed.  Jennifer Burrows in the central role of Maria gives an impressive interpretation of the part. I first saw her as the exotic Anita in the LAOS production of West Side Story at the West Yorkshire Playhouse in which she was brilliant. The role of Maria is a complete contrast and I thought I detected first night nerves which evaporated as soon as she became involved with the children. The popular songs ‘Do-Re-Mi’ and ‘Lonely Goatherd’ were a delight with sincerity and brightness in her performance never lacking.  Special mention for the children and the precision in their song ‘So Long Farewell’.  The part of Captain Von Trapp is a good role for a man. Austrian and hating the Nazis, smart, handsome and eventually falling in love with Maria. Darren Roberts is certainly master of his children and the household. I wasn’t sure of his depiction of the role. Perhaps a little more humanity and humour would have helped in his portrayal. He has the lovely song ‘Edleweiss’ with Maria and the children which is always so poignant. It was great to see Anne Tonks on stage at the Grand Theatre. A stalwart in the Bradford area, she was excellent as Mother Abbess, full of feeling and still with the vocal ability she always had. Her singing of ‘Climb every Mountain’ was superb and a highlight. In whatever role he plays, Mike Porter is always convincing and meaningful in his approach to his performance as Max, helping best friend Von Trapp to escape. Rachel Aston plays the elegant Baroness Schraeder, fiancé of Von Trapp. She has a pleasing singing voice and a fine stage presence. All three impress in their two lesser known musical numbers. Christine Castle adds her expertise to the role of Frau Schmidt, and as Franz, Johnny Hirst completes the cast.

The Society’s next show will be Footloose in November at the West Yorkshire Playhouse.