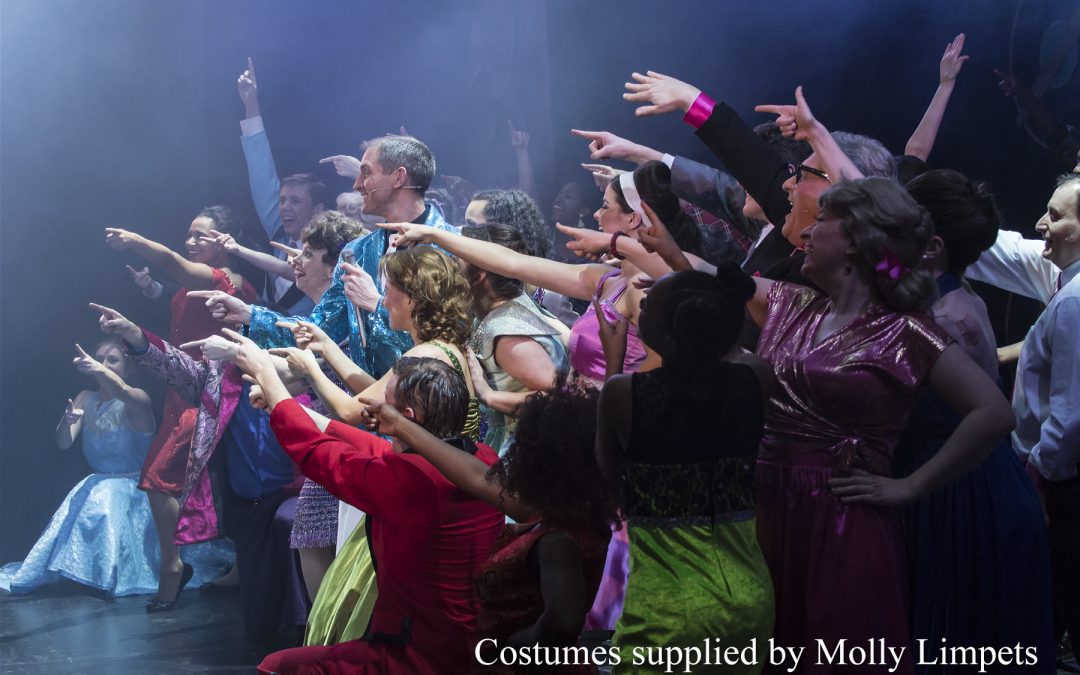 “I’ve seen this show in the West End, and the film, but the energy and passion I saw on Tuesday night was absolutely electric”.

“The man who played the part of Edna, which Michael Ball played in London, was taken by a man who’s day job is Head of Drama at one of our big high schools”.

“It was a passionate performance, a tight show and good costumes. How everyone enjoyed it and it was up an extra notch for me”.

“We met Pat Bell last week who plays Motormouth Maybelle and she was a revelation, normally quietly spoken, but by golly not when in character on stage”.

“There was an infectious enthusiasm and energy from the whole cast, all in character and having a great time and we were on our feet dancing at the end”.

“LAOS are very good at attracting talent from across our region, not just Leeds, and so they are well on course for more successful years to follow their 125th anniversary”.

“The show scores 9 out of 10. It just leaves you smiling, and what more can you want from a night out at the theatre”

Hairspray review by Val Pennett for the Wharfedale 17/03/2015

The first night performance of Hairspray, the latest production from this talented Society, received a standing ovation. Vibrant, colourful, superb choreography and detailed direction from Louise Denison gave the show such energy, which from an audience point of view was completely overwhelming. The orchestra of 9 were brilliant, with Jim Lunt again the Musical Director. The music is tuneful, catchy and lively,  and in the 60’s style with ‘rhythm and blues’ and ‘spiritual’ and very enjoyable. Costumes were bright, colourful and looked good.

Hairspray is about the difficulties and social injustices of American society in the 1960’s, and about Tracy Turnblad, a plump teenager who longs to dance and audition for a show. Tracy gets her wish and with her happy, caring nature manages to change more important things too.

This is a terrific company show with outstanding individual performances not least, Megan Elsegood as Tracy. She is joyful and expressive and delightful to watch, with a fine singing voice. The role of her Mum, Edna, is traditionally played by a man, Michael Ball taking the part in the original London production. Seeing glimpses on TV, I could never see the point of this, thinking it would be pantomime dame-ish. How wrong. Richard Billings is fantastic. Never over the top, he is a loving, caring mum and has great stage presence. One of the best numbers in the show, it got an encore last night, was ‘Timeless to Me’ sung together with dad Wilbur Turnblad, played  by one of my favourite people to be on stage with, the irrepressible Peter Whitley. This scene was a ‘hoot’. Peter’s comic talent exceptional throughout the show. There was an engaging and easy feel performance from Timothy Gough as Link Larkin, his diction clear cut and precise. He has a strong and pleasing singing voice, and at first sight Tracy falls in love with him. The two worked well together. Katie Melia was hilarious as Penny Pingleton, a really super performance. Her mum, Prudie, well played by Georgie Gladwyn is horrific when her darling daughter falls for a black boy, Seeweed Stubbs. His is an important role as leader of his black friends. Chris Knight has great dancing skills and a fine voice too. Pat Bell as Motormouth is superb, her beautiful singing voice smooth and rich, her dialogue heartfelt. Even in the Dress Circle, we could hear every word. A sparkling performance came from Lizzie Nunn as Amber. Only 18, a super dancer-singer, she was confident and bitchy in her dislike of Tracy. Over the top mum Velma, played by Susan Wilcock encouraging her spoilt daughter. Compere of the Corny Collins Show was the excellent Ben Walton. His was another superb performance. My only quibble is that some higher pitched voices, both singing and speaking, came across as forced.

However, don’t miss it, it’s only on until Saturday. Evenings 7.15, Saturday matinee at 2.30, Special Family Performance on Friday at 5.00 followed by an evening performance at 8.00.

A musical about racial segregation, overweight people, prejudice and high school bullying could have been a very upsetting watch however certainly not in the case of Hairspray.

Hairspray is the award winning musical which presents dance-loving teen Tracey Turnblad from Baltimore who has big bones and big dreams to dance on the Corny Collins show and stop the black and white segregation of 1960’s American society. This is LAOS’s 125th Anniversary performance and brings energy and excitement to the stage with catchy songs and lots of dancing. They have over a hundred members based around West Yorkshire and the society performs two shows a year and have performed at some of the most famous theatres in the county.

Tracey becomes an overnight celebrity after she auditions for a place on the Corny Collins show and wins. She exuberates dance, fun and fashion. The characters are colourful in both character and dress sense and the costumes look like a great deal of time and effort has been put into them. They are flamboyant and big to match the characters personalities.

The songs included 1960’s dance inspired to downtown blues and these savvy arrangements from the orchestra made everyone get up on their feet.

The vocals of the cast were as big as the hair in the show, covering that of rock and roll, gospel and all kinds of music. ‘Good morning Baltimore’ and ‘You can’t stop the beat’ were top favourites for feel good songs for the crowd. It became hard to stop yourself tapping along to the beat and smiling.

Despite the fun and colour that is incorporated into the show to put on a spectacle, the injustices of the American society in the 1960’s shows through and so what if it wants to social preach, because the fun flavoured show gave a marvel of a performance.

Playing the part of Tracey’s mother was actor Richard Billings and although being male and playing a female role he played the part perfectly as a butch woman with a little camp in it who goes from shy housewife to supersize femme fatale. The scene between Wilber and Edna got the audience laughing with their words which at times seemed unscripted however kept with the realistic aspect of the show which presents that everyone should have a chance to go for their dream.

Particular great performances were by Amber, Penny and Motormouth Maybelle whose vocals stole the show. With amazing costumes, wigs, clever staging such as the living room and The Corny Collins show dancers and excellent music by Marc Shaiman, Hairspray is a fabulous feel-good show for all ages which had the majority of the audience on their feet by the end of it.

Hairspray is well known as a show about big hair, big voices, and big hearts. It’s also a show about sisterhood and self-discovery, and LAOS has made not one, not two, but three huge discoveries in Megan Elsegood, who plays Tracy Turnblad, Lizzie Nunn, who plays Amber Von Tussle, and Katie Melia, aka Penny Pingleton. Elsegood is no stranger to the stage or LAOS (having played Jenny Dillingham in their production of Aspects of Love in November 2014, and performing with many other societies) but I have no doubt that she will deservedly look back at Tracy Turnblad as one of her formative, most outstanding roles. Her diminutive form belies a powerhouse vocal and energetic dancing which looks effortless. Newcomer Lizzie Nunn also catches both the eye and the ear as stroppy, jilted songbird Amber, but for me the most compelling performance of the might goes to Katie Melia, who played Penny Pingleton. In any other hands Penny might be seen in character terms as the poor relation to her bubbly best friend, but Melia makes her irresistible. Her quirky characterisation and impeccable comic timing  make her the most compelling figure in the show and definitely one to watch in the future. These wonderful actors are only a small part of this talented company who have once again outdone themselves with another fantastic, hair-raising show!