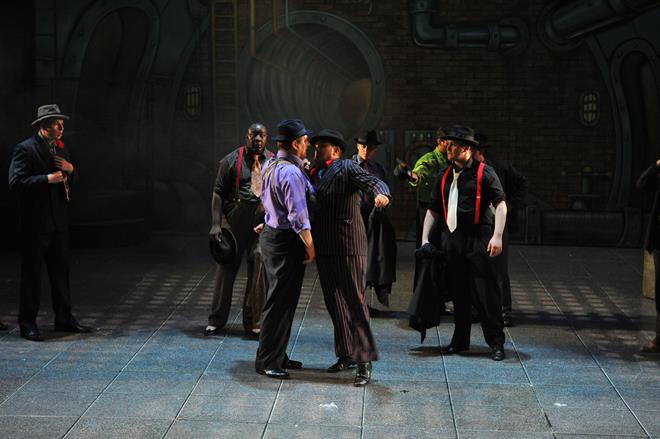 Guys and Dolls has delighted and entertained people for over fifty years. It is a classic musical with a wonderful story and a fabulous score by Frank Loesser. Songs from the show such as Luck be a Lady and Sit Down You’re Rocking the Boat have become well known in their own right, perhaps made even more so by the 1955 film starring Marlon Brando, Frank Sinatra, Jean Simmons and Vivian Blaine.

The story centres around an illegal crap game run by Nathan Detroit; a crap game that floats from location to location in a bid to evade the law. Nathan struggles to find a suitable place to hold the latest night for his gambling friends and decides that making a wager with Sky Masterson will solve his problems. No musical would be complete without a love story and this bet soon turns into one, with Sky falling for missionary Sarah Brown and Nathan finally wedding his fiancé of fourteen years.

It has all the components for a wonderful night out, and LAOS most certainly did it absolute justice. Their six-piece jazz orchestra situated at the back of the stage behind a screen worked remarkably well, injecting vigour and energy into such a deserving score. The set too was impressive and the opening number was full of the anticipated excitement you want to feel when watching a musical. Everyone in the cast from chorus to leads committed fully to the production, and most important of all they clearly had great fun. They successfully created a space and a time that as an audience member you felt a part of, and there were some very good performances. In particular Richard Billings as Nathan and Gemma Durkin as Miss Adelaide gave confident and assured performances with strong vocals.

It is well directed, well choreographed, well staged and makes for a fantastic show, which will leave you skipping out the theatre and singing to yourself. It is hugely enjoyable, and it radiates such warmth and fondness for every character and all involved that it would be difficult not to feel charmed by it. It if were a bell, it would most definitely be ringing, singing and dinging.

Review by Val Pennett for the Wharfedale & Airedale Observer

Although Guys and Dolls was first produced in 1950 in New York, it has never been given by the  Leeds Society before. Based on short stories by Damon Runyon set in the heart of New York, characters come alive, combined with Frank Loesser’s brilliant score that gives Guys & Dolls classic originality.

Production is stylish and totally in keeping with the era with dancing and  movement from principals and chorus  a treat. Louise Denison, Director and Choreographer, again does a splendid job for the Society. The orchestra under the direction of Jim Lunt and set at the back of the stage, gave a wonderful jazzy interpretation of this lively score. Staging looked colourful, helped by excellent lighting. Scene changes were slick and unobtrusive. The ‘Guys’ dominate this show. Collectively and individually they are brilliant with songs like ‘Oldest Established’ and ‘Luck be a Lady’ which were boisterous and entertaining .

The story line is clever and involves crap games and gambling, Sky Masterson winning a bet that he couldn’t take a Mission girl to dinner in Havana. The rousing title song was outstanding, as well as the Havana scene plus ‘Bushell and  a Peck’ and ‘Take back your Mink’ with Adelaide and the girls. The cast excel, Joe Mellor as Sky has stage presence and a fabulous singing voice. Richard Billings is ideal as Nathan Detroit with a fine voice and comedy timing.  As Nathan’s frustrated ‘Doll’ Adelaide, Gemma Durkin shines. It’s a gem of a part with comedy lines to die for. All her musical numbers were sung with command  and vivacity. I just wished for less haste at times in her comedy timing.  Mission girl Sarah Brown is not an easy role to define, but after a shaky start with the song ‘I’ll Know’, Nicky Burrows took control and played  her part with ease. The duet ‘I’ve never been in love before’ with Sky was delightful.  Special  mention to Guys, Paul Bamber as Benny,  Nathan Winn as Nicely singing a superb ‘Rockin the Boat’ and Fraser Wilkinson as Rusty. Mike Porter as Big Jule, Terry Ford from Otley as Lt. Brannigan  and Richard Pascoe as Arvide were impressive.

Completing the principals cast were Dave Bigland, Winstan Robinson, Chris Speight and Christine Castle. This production was a wonderful, lively, brilliantly paced show. In 2015 LAOS will celebrate 125 years, a great achievement. The Society are to present ‘Sound of Music’ at the Leeds Grand Theatre in March 2013.