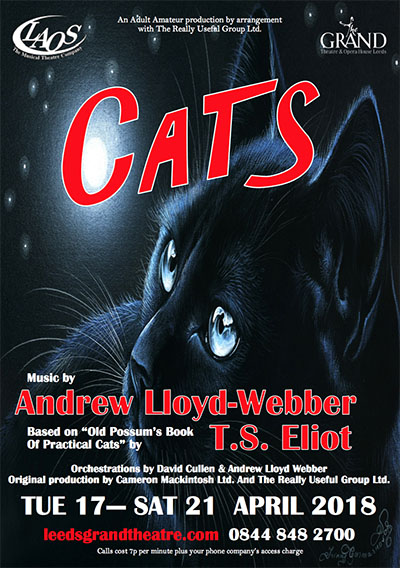 I arrived at the Grand looking forward to another great show by LAOS and as ever they completely surpassed my expectations. While some of the wheelchair spaces do restrict your view of certain aspects of certain shows, I’m happy to say this isn’t the case in row G seats 2 and 3 which my PA and I had, in fact I had a really intimate perspective on the cats who crept out of the side door adjacent to my seat on their way to the Jellicle Ball, a refreshing change since it is easy to feel stuck out on a limb and disconnected from the action in the other spaces. Since I also have a hearing impairment, I appreciated that Ben Walton, who played Munkustrap, had great diction and clarity to his voice, not an easy feat with T S Eliot’s tongue-twisting lines! Their feline facades are so effective and captivating it is hard to match human face to character even with the aid of the programme, a testament to great costumes and makeup skills. At times the orchestra overpowered some of the singers making it difficult to discern all the lyrics but hopefully that will be addressed as the run continues, and it didn’t detract from my enjoyment of the show.

Cats is definitely one of the largest ensemble shows I have seen LAOS put on, and when managing such a large cast the director might be forgiven for not holding every single actor to a perfect standard, but every member was so synchronised and their movement flowed so effortlessly I thought I must be watching something by Northern Ballet. The variety of movement was refreshing, I watched with wonder all the backward somersaults and fouettés and also laughed aloud at the comedy of the tap-dancing cockroaches and mice/kittens.

Notwithstanding the talent of the ensemble as a whole, Jacqueline Bell, who plays Grizabella, is truly outstanding. Her statesmanlike performance in both acting and singing demands that she be recognised in a leading professional role, having recently seen Sunset Boulevard professionally, I believe she would make an exceptional Norma Desmond. I also enjoyed her tender interaction with Victoria, (played by Erin Chapman), and I could picture them both as Elphaba and Glinda in Wicked, perfectly executing ‘Defying Gravity’, should she swap tyre for bubble.

The show is only on till 21st April so don’t be caught napping, dare to indulge your curiosity and you’ll find that this flight of feline fancy really is the cat’s pyjamas.

Can I please say a big thank you to you,  your President John and Chairman Mike for your generous hospitality and kind invitation this evening when I came to see your production of Cats.

I know I can speak for everyone in the audience when I say how good it was, in fact it wasn’t good it was fantastic and to quote The Lord Mayer it certainly was not a show which could be called AMATEUR, it was an extremely PROFESSIONAL production.

Please pass on my congratulations to everyone involved, they should all be very proud.

With very best wishes for the rest of the run.

As a keen lover of cats, (the animals) yet having never seen Cats (the musical) I really didn’t know what to expect from this show. As I entered the auditorium, I was instantly absorbed by curiosity as I gazed upon the grand collage of a set. It was a bare but intriguing back-alley scene and I was instantly taken back to seeing Road (Jim Cartwright) many years before. Although an obvious contrast in theme and genre, the essence created on stage of a rusty, rough and rugged world was so similar that I couldn’t help but compare.

So, upon this set of poverty and deprivation; shone a beautiful light show and projection sequence that aptly prepared the audience for the wild and wonderfully weird performance that was to follow.

Captured by this intriguing introduction; I sat back to see the spectacle, that was of course the Cats themselves. Emerging from all sorts of hidden corners, these creatures burst into action. Make-up and costumes were inventive and extraordinary but beneath this beautiful artistry was the real delight of the show. Right from the start, the pure talent, passion and energy of these performers was undeniable.

Firstly, there was the singing. Everyone had a unique, powerful and well-trained voice that carried the story forward. Although, there were times I lost track of what was going on, it didn’t matter because there was not one voice that I found irritating or tiresome.

There was a mixture of styles amongst the voices too. Some sounded jazzy, some classically operatic, while others adopted a comedic tone. The variety made it even more interesting. Cast to perfection, each singer sang with a high level of emotion and passion that gripped the audiences’ attention throughout. Especially, of course, when the cast sang in beautiful unison and the powerful ensemble sound filled the space with magic and I was utterly overwhelmed by the pure beauty of it all.

Secondly, I was in shock at the level of skill, energy and abundance of dance throughout. How could such vibrant and talented singers dance as well? It was spectacular! A fun and colourful combination of contemporary and modern ballet mixed with acrobatics along with a sneaky bit of tap just for added effect.

From cheeky comedic duos to acrobatic solos along with plenty of whole cast numbers in between. Amazing. All of course done in the style of a cat, never forgetting the paw-like features and traits they must project. Just magnificent. I was in utter awe of these performers.

So, I left the show feeling completely mesmerised by it all. Leeds Amateur Operatic Society put on a performance that will stay with me. There was nothing “amateur” about it. It was professionally performed and well-received by many; giving it a standing ovation on its first night. What more could you possibly want from a musical? It really was breathtaking.