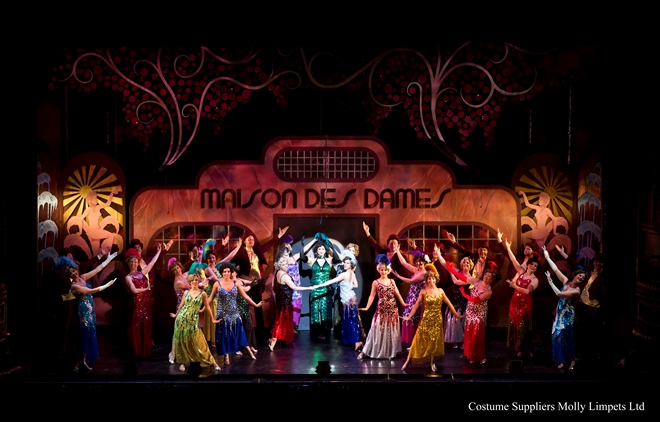 By Marianne Tuckman for the West Yorkshire Theatre Network

I went to a musical. I went to a proper musical. With this quantity of sequins, smiles and slicked-back hair, there could be doubt. During the interval one of the LAOS patrons (a real Northern gentleman) offered me a cheese scone and said ‘Well love, if you’re going to do it, it’s got to be done properly. Otherwise what’s the point?’ This ethos serves The LAOS well and they generously deliver everything that the word musical suggests.

Although LAOS stands for Leeds Amateur Operatic Society I watched the first half thinking that it was a professional production. I am far from a Musical Theatre expert but apart from a few bits of fuzz and clumsiness the show seemed to be of professional standard. Determined ‘to do things properly’, the society spent £90,000 on their production of 42nd Street. This translated into lavish sets, multiple costume changes and a large live band that was unfortunately hidden deep in the orchestra pit.

The audience at Leeds Grand City Theatre was excited and jolly; ready to chuckle at the corny jokes, gasp at appropriate moments and eat an ice cream in the interval. We followed Peggy Sawyer, a pure Pennsylvanian girl who dreams of making it in the dirty world of show business. She is just another ‘speck of dust’ in the chorus line but her talent gets her noticed. When the ungracious diva Dorothy Brock breaks her ankle Peggy takes her place. 42nd Street is a parable of sorts as our nice girl finds success without becoming corrupted by the vice of filthy Manhattan.

It is not the intricacy of the story that makes the show enjoyable. As Ben Walton sings: ‘who cares if there’s a plot or not if they’ve got dames!’. There are some sparkling ladies at LAOS. Peggy Sawyer was played by seventeen year old Lydia Bradd. Her petite frame and general charm reminded me of Debbie Reynolds from Singing in the Rain. She shone. Her dancing was performed with a quality of enjoyment that radiated out into the auditorium. My favourite was Maggie Jones. She played her role of the cheeky, bizarre dance teacher with a twinkle in her eye.

It is a huge, comforting pleasure to go the theatre and get exactly what you expect. Having spent the last two years training in contemporary dance, my days are sometimes too full of challenging tradition. I revelled in the opportunity to sit back and allow The LAOS cast to twinkle me away to Musical Theatre World. There were no threat of audience participation, no cynical twists and no hints of naturalism. If you’re looking to escape from the grey drudgery of reality, allow these capable jazz hands to take you to 42nd Street. On leaving the theatre, your smile won’t be quite as wide as those on stage but its width will have increased.

By Hasan Faridi for the Yorkshire Standard

I had the opportunity to be in the audience, as I watched a show that eventually changed my perception on musicals.

The story of 42nd Street followed the life of a strong-hearted theatre producer named Julian Marsh (played by John Hall) as he tried to stage a Broadway musical at the height of the great depression in New York.The audience was practically watching a play, inside a play.Tensions got high between the proud leading lady Dorothy Brock (Laura Judge) and an enthusiastic newcomer Peggy Sawyer (Lydia Bradd) at the auditions.

The story revolved around Peggy, who seemed to stand out from everyone else with her fancy footwork and singing prowess.Showing us she had the potential to replace leading lady Dorothy, she was with no doubt “hot in the foot department” as Maggie Jones (Samantha Griffiths) said.Maggie, like Bert Barry (Jonty Wilson), was undoubtedly one of the funniest characters, whose mannerisms and jokes had the majority of the audience chuckling over.

Throughout 42nd Street, I paid the most attention to the storyline. It was entertaining and not just full of dance and song. There were also a couple of twists and turns that I sure weren’t expecting.Just before the interval for example, the producer Mr Marsh told us (the audience) that our tickets would be refunded due to a sudden change of events in the storyline.

It was an act of course, but it drew the audience into the play.

The play wasn’t cheesy as some might expect. Sure it had catchy numbers and glamour, but it wasn’t overdone. The only exception was when everyone sung and danced on dimes for the catchy number “We’re In The Money” that was a scene made to remember.

Dance routines were complex and well-rehearsed, consisting of a variety of moves including twirls, hops and pirouettes.

I was mainly surprised at how well everyone was in sync with each other, sometimes dancing so close that it may have turned catastrophic if something went wrong. But nothing did, and the show dazzled.

The only disappointment was that I could barely see much of the younger generation attending. It made me think that, perhaps, people are missing out on quality theatre productions, and this included me.

All in all, 42nd Street was an entertaining production I’ll remember for a long time. Kudos to LAOS for such an enjoyable experience.

By Val Pennett for the Wharfedale

If you enjoy a singing, dancing show, glitzy razzle dazzle, tap dancing at its very best and of jaw dropping intensity, then do not miss this production

42nd Street is another show where every song is a winner. ‘You’re getting to be a habit with me’, ‘Lullaby of Broadway’ and of course the title song.  The production duo of Louise Denison, Director/Choreographer, and Jim Lunt, Musical Director, have been with the Leeds Society since 2005, and my word what a team they have become. Choreography is stunning, it’s musicality and precision jump out at you. Louise keeps movement flowing with groupings and people moving on and off stage. Such hard work for all concerned, but how rewarding, and believe me from an audience point of view that hard work was worth every minute.

After a fine overture, Jim Lunt and his 14 musicians give great support to the Company. It cannot be easy for them to be totally in time with a group of dancers of this standard, particularly in the show stopping tap number ‘We’re in the Money’. Singing of the cast and principals was excellent. Two performances were outstanding. John Hall as Julian Marsh and Lydia Bradd as Peggy Sawyer. John has experience, well judged timing and a stage presence which, together with a strong singing voice, gives him command of the role. Lydia has been performing on stage since she was 5 years old. Still only 17, she is wonderful as the newcomer chorus girl projected into the star role after being accidentally involved in a collision with the ageing leading lady, Dorothy Brock. Even at this early stage Lydia has the vitality and a capacity to make an audience’ believe’. A powerful and tuneful singing voice and superb dancing skills make her performance one to be remembered.  Laura Judge is well known in the Ilkley, Yeadon and surrounding areas. As Dorothy Brock she gives an accomplished performance and has great vocal ability. Notable performances also come from Ben Walton as Billy, Samantha Griffiths as Maggie, Mike Porter as Pat Denning and Ian Hewitt as Abner.

The show continues until this Saturday 22nd, evenings at 7.15 and a Saturday matinee at 2.15.